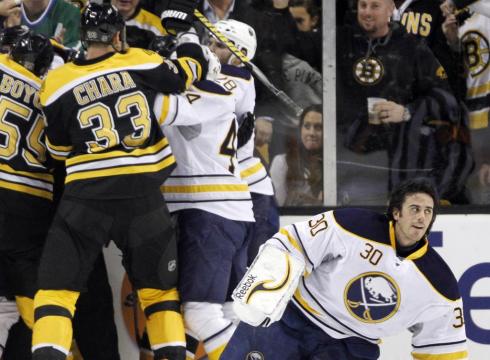 I’m a goalie, so I have all the exact same feelings of territorialism and indignant rage over insults both real and perceived that any of my masked brothers experience when they’re out there on the ice.

But this whole Ryan Miller vs. Milan Lucic thing that just happened? Miller, well, there’s no more discreet way of putting it… he kinda deserved it.

For those of you who don’t know what I’m talking about, in a game between the Boston Bruins and Buffalo Sabres on Nov. 12, tank-like Bruins forward Lucic was fast-breaking towards a loose puck in the Sabres end. Sabres goalie Miller rushed out to play said puck, just beating Lucic to it, after which Lucic barreled into Miller with a bodycheck, subsequently giving him a concussion.

Miller was livid after the game, calling Lucic a piece of shit in the media.

Thing is, I’m sure he’s legit angry, but Miller’s complaints were at least partially dramatic posturing (I’m betting as theater to get Lucic suspended… which the league said won’t happen). Really, it’s Miller’s own fault that he got plowed. I know, because I’ve been there. Many times.

OK, well, not many times against an all-world power-forward with the spirit of Ram-Man in him, but I’ve been on the receiving end of that exact same sequence many times. And Miller played it all wrong. 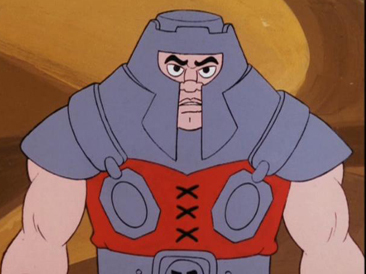 See, I’m an adventurous goalie. I like to play the puck, come out of the crease, mix it up a bit, and when you perceive the ice that way, things happen. I know us goalies are supposed to be sacred untouchables, but whenever I leave the net I’m hyper-vigilant because I ASSUME someone’s going to try to bump me. And that’s the assumption Miller should have been working from.

The worst that ever happened to me was when I was playing junior. I forget who we were playing, but I dove out, flat on my belly, to pokecheck a loose puck away from a guy who was on a fast-break. I got to the puck first, but then that guy DOUBLE KNEEDROPPED ME. In the head. Pro wrestling style.

I beat him to the puck. Was vulnerable. And he was an asshole. So he corked me. I remember blacking out as I was getting up… that’s how hard I got hit. So I know.

I also know that Miller’s injury was preventable in a number of different ways. So let’s establish a baseline:

I guarantee Miller saw Lucic coming and had a pretty good idea what might happen the second he left the net.

So should Miller have just stayed in his net and let Lucic get an unopposed breakaway that was otherwise preventable? No. Coming out and playing the puck was the right play. But jeez, man, it was Milan Lucic. You’ve got to know he’s not going to play nice, so you’ve got conduct yourself accordingly.

As such, here are three things Miller could have done instead of let Lucic rock him:

1) The poke ‘n’ turtle — Skate towards the puck as fast as you can. See Lucic coming. Dive at the puck with a pokecheck. Hit puck. Knowing collision is eminent, immediately turtle into a wrecking ball directed straight at Lucic’s knee. Impact.

2) Channel Mike Peca — Mike Peca was scrawny, but he was a vicious open ice hitter. Lucic is way bigger and stronger than Miller, but if Miller had gone into that sequence 100 per cent planning to lay the shoulder down, I’d give him solid 50/50 odds he could’ve completely surprised Lucic and maybe even rocked him.

3) Headshot — Oh noes, what a horrible thing to say. Well, the only way Miller would be able to throw an elbow or blocker punch or other type of headshot is if Lucic is coming right at him with the intention of hitting him, which means there really is no moral high ground at that moment, so why not approach this inevitability from the position of aggressive self-preservation?

I’m of the mind that Miller just didn’t think Lucic would be able to rock him in this game of chicken. Which is plain and simply a horrible mistake, and he should have known better. This isn’t even a question of whether Lucic was right or wrong in not letting up/going for the hit, it’s about the fact that Miller, a veteran goalie, who was playing against a bitter division rival who he should theoretically be intimately familiar with, saw Lucic coming, and for some (very erroneous) reason either a) didn’t believe Lucic would actually go through with hitting him, or b) thought he was badass enough to take any potential Lucic hit without defending himself in a more effective manner.

Oh my God! So does that mean you’re saying it was Miller’s fault he got run over by a goon? Well, to bait you, dear audience, yes. But really, it’s more about just being smart. Miller should have seen that coming a mile away. He should have known. And done a better job of protecting himself in as strong a measure as he felt he needed to in the face of one of the NHL’s elite hitters.