//
you're reading...
Game Results, Skillz, Stick 'Em In The Mind

How Gary Leeman Helped Me Find Myself 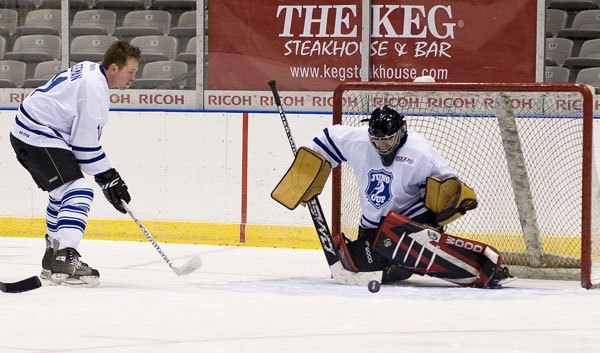 Gary Leeman shooting on me. Photo by Richard Beland

Since the beginning of time man has asked himself, “How good am I?”

It’s why people compete in marathons, why they wrestle each other, and why they get into drinking contests with the Bytown Billionaires. It’s partially a test against one’s competition, but it’s just as much a test against oneself. Where do I rank? Am I The Best? Am I elite? Am I good? Or, uncomfortable pause, do I simply suck?

Thanks (or no thanks?) to former Toronto Maple Leafs forward Gary Leeman I now know my place.

It all started out rather innocently early this February. Morningstars member Chris Topping cornered me at a Juno Awards press conference.

“What are you doing next week?” he asked. “I may need another goalie. I’m doing a Juno Cup media day at Ricoh. We might be able to use you. You in?”

One week later I was on the pristine ice at Toronto’s Ricoh Coliseum, home of the Toronto Marlies, with my Hockey Association Of The Arts peers like Andrew Scott of Sloan and the Halifax-Dartmouth Ferries, Chris Murphy of Sloan and the Halifax-Dartmouth Ferries, Jon Gallant of Billy Talent and The Nightmares, Jim Cuddy of Blue Rodeo and The Nightmares, and Peter Kesper of NQ Arbuckle and Capsule Music.

The rules of engagement for the afternoon were simple. For the first hour the Rockers and NHLers would skate around taking shots at Kesper and I while doing some skills drills as photo ops for assembled media. When that was done we’d play some shinny.

This was going to be awesome. I was skating with NHLers and I was going to find out if I was really as good as I thought I was.

The skate started out easily enough. Ace photographer and fellow Hack HC teammate Richard Beland launched a few good ones at me. Scott and Gallant fired a few that had a bit of steam, too. And Murph, bless him, he tried.

And then the NHLers hit the ice. 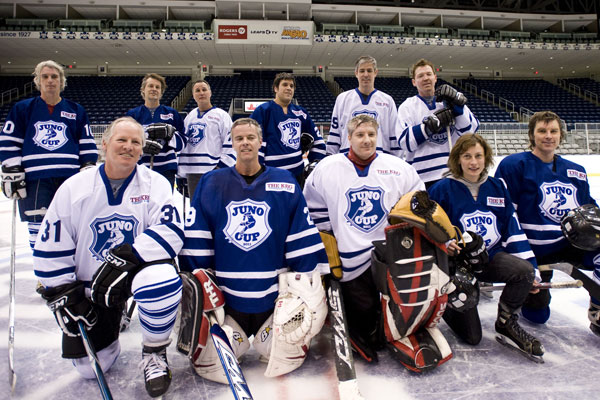 It wasn’t like they were going full-out — Dalgarno was wearing jeans with his skates — but the former pros weren’t completely Kovalev-ing either. Dalgarno did one move where he skated straight from centre ice towards me, slapshotted the puck into the corner in such a way that it perfectly ricocheted back to him in the slot, and then flipped it top shelf. But I fared well against him the rest of the way.

I stopped Napier a bunch. And even managed to get “just enough” of a few Coffey heaters. To be fair, though, the ex-Oiler seemed more interested in mischievously shooting pucks into the feet of people who were standing around uninvolved in plays. I saw him do it about five times and I suspect he may have been playing a sort of Frisbee golf game with himself at everyone else’s expense.

Y’know that Linus Omark goal? The breakaway one with the fade away chip shot over the goalie’s shoulder? Yeah. He did that. Except there was no fade away. He just came straight at me and shovel-flipped the puck over my head the second I went down.

There was one of those lacrosse goals where you pick up the puck with your blade and carry it. There was about five straight five-hole goals.

The worst? At one point he stood two feet away from me and went, “Tell me exactly where you want it.” I said, “Glove high,” and put my glove up. And he still scored. I knew where it was going. I. Had. My. Hand. Up. And he still beat me.

And that’s when I found out how good a goalie I was. I figure I was rocking a solid 75-80 per cent save percentage against retired NHLers when they weren’t trying, and about 35 per cent against a former 50-goal scorer when he was.

I feel pretty comfortable with those numbers. ‘Cause the worst competition I’m going to have to face Summit weekend is The Gooch. And the closest he’s ever come to the NHL is an old Colorado Rockies lunchbox he accidentally ate while tripping once.

This story originally appeared in the 2011 Hockey Summit Of The Arts program guide.

« That Time I Played Against Marcel Dionne And Dennis Maruk
Clint Malarchuk On Mental Health: ‘It Doesn’t Matter How Tough You Are, It Can Hit Any Person’ »